The Galapagos Islands are an archipelago of volcanic islands situated in the Pacific Ocean at 1,000 km from the Ecuadorian coast. This archipelago is composed of 127 islands, islets and rocks, of which 19 are large and 4 are inhabited. 97% of the total emerged surface was declared National Park in 1959.

In order to protect the environment, the Galapagos National Park sets fits itineraries for the the local fleet. Also, the National Park administration manages the capacity of each visiting site, guaranteeing that visitors have sufficient time to enjoy the islands and the activities proposed on each place.

The five largest islands are Isabela, Santa Cruz, Fernandina, Santiago and San Cristóbal, which cover 93.2% of the total area of the archipelago.

Isabela (Albemarle) is the largest island in the Galapagos, with an area of 1,792 miles. It is a slice of paradise in Ecuador with plenty of activities for nature lovers. Hike one of the world's largest volcanoes, enjoy beautiful beaches, swim and snorkel in the ocean or be in contact with exotic animals in their natural habitat such as, Galapagos doves, land iguanas, penguins, crabs, sea lions, turtles, hawks, Darwin's finches, pelicans and flamingos. Most of Isabela's inhabitants live in Puerto Villamil, a pretty village in the southeast of the island.

Santa Cruz Island, located in the central part of the Archipelago, has an area of 986 km² (381 square miles) and a maximum altitude of 864 metres. Due to its lush vegetation and wonderful scenery, it is ranked as one of the islands with the highest number of activities to do. Charles Darwin Research Station, Twin Craters, Black Turtle Cove and Turtle Bay.

Also known as Puerto Baquerizo Moreno, San Cristobal Island, located to the southwest of the island, is a true natural paradise, where the force of the waves merges with natural sculptures of volcanic rock. In its impressive seabed you can admire all kinds of animals such as dolphins, marine iguanas, tropical birds, giant turtles, sea lions, flamingos, and many other species. The Interpretation Centre, to learn about the history of the islands. The Galapaguera of Cerro Colorado is a large space dedicated to the breeding of turtles that walk freely among the visitors. It is advisable to take an excursion for approximately 4 hours and enjoy tortoises of all sizes and ages. Kicker Rock, Pitt Point and Tijeretas Hill are also places of singular beauty where snorkelling, bird watching and other animals such as sea lions and landscapes leave no one indifferent.

Fernandina is the third largest island in the Galapagos after Isabela and Santa Cruz. It is named after King Ferdinand II of Aragon (Spain) who, together with Isabella the Catholic, Queen of Castile, sponsored Christopher Columbus' voyage to America. It is probably the least accessible island. It is home to the Cumbre volcano, one of the most active volcanoes in the world, which is why it is uninhabited. To the south of the island there is a fissure, the result of an ancient eruption, which occasionally allows you to see rivers of lava; one of the few places in the world where you can see a natural spectacle of similar characteristics.

The island of Santiago is located in the centre of the archipelago and is named after the Patron Saint of Spain. It is a paradisiacal place with spectacular geological landscapes. James Bay, Bucanero Cove,  Sullivan Bay and Espumilla Beach, will not leave you indifferent due to the beauty of its landscapes and animals in their natural habitat

OUR SELECTION OF YACHTS IN THE GALAPAGOS

Below is a selection of yachts available for charter in the Galapagos. If you do not find what you are looking for, please contact us for other alternatives or for advice on your search. 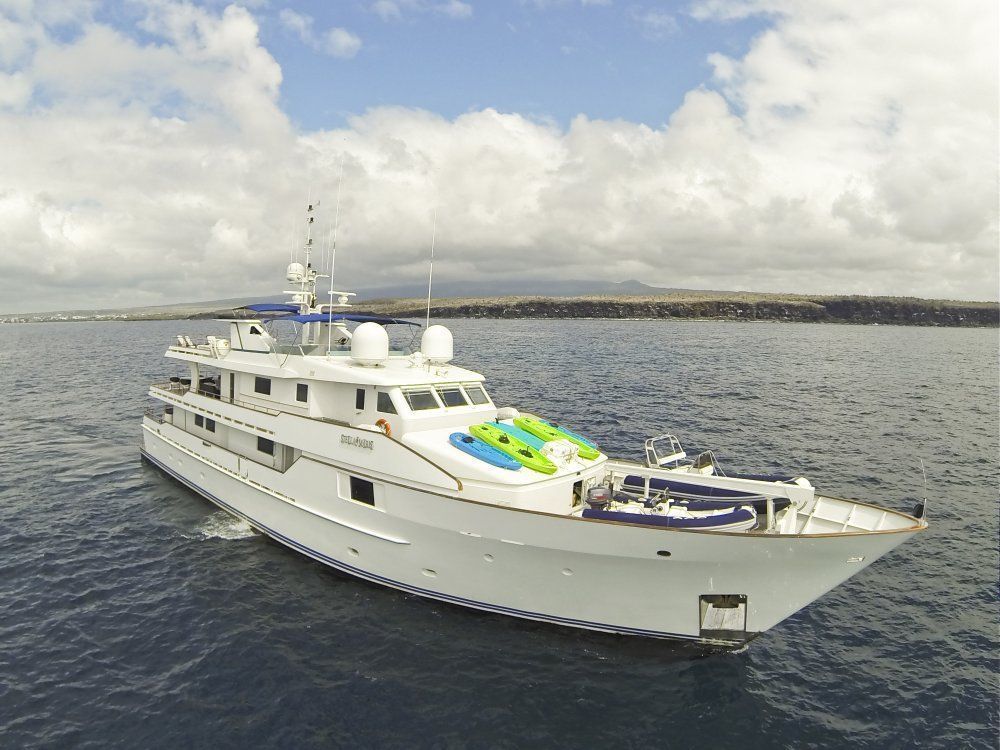